3 man weave off the board improves player’s athleticism, jump timing and ability to make offensive rebounds.

This drill will seem challenging at first on player order alone, be patient with your players and teach them the rotation slowly.

After practising and teaching some rebounding fundamentals, use this drill to make rebounding a competitive, fun part of your practice.

Make 2 teams out of all players, with 2 players from each team in the half-court. Designate 1 pair as offense and the order defense. Coach stands on the wing with a ball in hand.

Remind players to use fundamentals learned in order drills.

Some of your most valuable players will be the players that excel in this drill.

Teach players to box out for rebounds by using their lower body and gaining position. 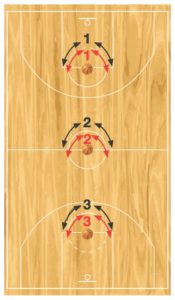 Players pair up. Place 1 ball in the center of the free-throw circle, or half-court. The defensive player faces the offensive player who is outside the circle.

To be a great rebounder, one must be able to create space and use feet and lower body to gain and hold the position.

Remind players to stay low for a stable strong stance.

Teach Players the fundamentals to follow before every defensive rebound. Teaches players how to create space and get more rebounds.

First, create space, then go get the ball for a rebound.

To make this drill competitive, instead of yelling SHOT, take a shot, and see how many times the ball teach players to rebound by creating space, and gaining position advantages, instead of trying to out jump others.

An offensive rebounding drill that teaches players to grab the ball and RIP through the defender’s arms, for possible “and 1” opportunities.

Players form groups of 3-4 and each takes 1 basket, each group with 1 ball.

Offensive rebounds often come from a crash from either wing. Have players approach from wing angles or other places in your offensive sets.

Promote proper footwork when rebounding, and teach the instinct for transitioning from a defensive rebound to an offensive fast break. 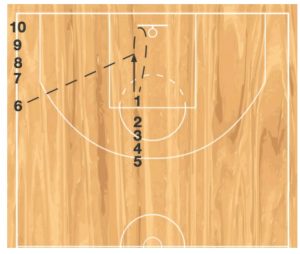 Have players yell “ BALL” and “OUTLET” so that in a game situation communication between guards and post players in fluent.

Once familiar with the drill have the rebounder and run the length of the floor with the outlet player for a bounce pass and layup. 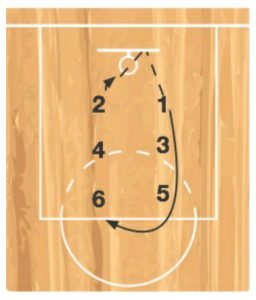 Partner Catch – Player Pair up and each takes 1 hoop, facing the basket, at each low block.

Team Catch – Players from 2 lines, with the 1st player in each line, facing the basket at each low block.

All Players make 1 line in the key facing the hoop, with the first player in line with a ball.

Have players get under the ball and go straight up instead of lateral jumping for maximum hang-time and a better position to catch, and throw with control.

Use as a pre-game warm-up, to re-establish team rhythm and muscle memory.

Improves rebounding instinct, and instills the habit of closing out then boxing out.

2 lines of Players on the baseline at each block, facing midcourt. Coach in the middle of the two lines facing midcourt with a ball in hand, Right line is designated as an offense, left in defense. 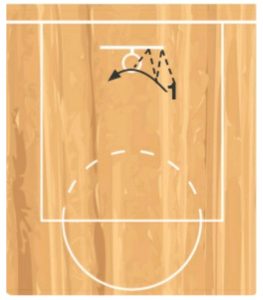 The Player makes teams of 3 and each trio takes 1 hoop. One player goes at a time and starts with the ball on the right side of the hoop facing the basket.

This is an excellent drill for improving leaping ability especially a 2 footed jump from a standstill position don’t allow the player to get lazy, or go through the motions as they tire, as this drill requires a well-conditioned lower body.

Improves player’s ability to make long board jumps for rebounds, and aggressively pursue the basketball. 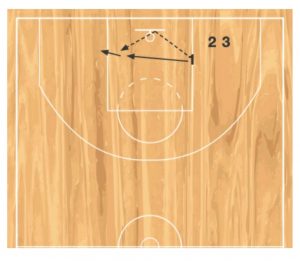 Players split off into groups of 3-4 with each group taking 1 basket, and 1 ball.

Make sure players are jumping off 2 feet, catching the ball at its highest point, while still trying to cover as much vertical distance as possible.

Improves athleticism and ability to tip in shots and offensive rebounds. 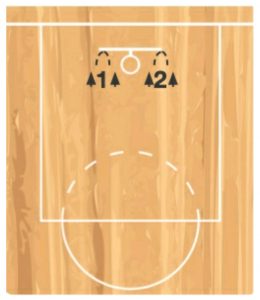 Players pair up under and each goes under 1 basket for the drill. 2 balls for each pair. Coach uses practice builder timer, or stopwatch to count time.

This drill will tire out your players so keep them focused on controlling the ball and timing of their jump.

The drill will also see improvement over time, so use to show players their  development and the rewards of hard work.

Teach Players the fundamentals to follow after every defensive rebound. Will minimise turnovers and start offensive transition opportunities.

1 Line of players at the right elbow facing the basket with the coach on the left block with the ball. 2nd coach or another player in the outlet position on the right-wing.

Make sure players keep the ball high at all times during this drill.

Chinning the ball and making a strong pivot will not allow defenders to make any play on the ball, and will guarantee retained possession.

On the pass, overhead passes should be strong to teach your guards to expect zippy passes from defensive rebounders.